The Relationship Guide: He’s Just Not that Into You

The Relationship Guide: He’s Just Not that Into You 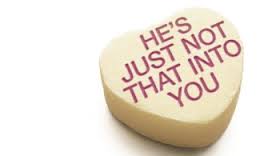 If you haven’t seen the movie He’s Just Not That Into You, we have all heard the daunting phrase.

The start of relationships can be exciting, nerve-wracking and at times confusing. At first, everything seems to be going really well. Maybe you met him on a night out with your girlfriends and he asked for your number and instantly you felt like “YES! He’s into me!” After a few days and no call, you start to wonder what’s going on. Is he busy? Did he lose my number? Did his phone accidently fall into a toilet? Then the self-doubt hits you. “Maybe it’s me. Is he not into me?”

Despite the optimism given by your friends and family, Here’s how you know that he’s not into you:

Identifying if he’s into you is probably the hardest part because the hopefulness inside of us always wants to be optimistic that things will work out. However, in most cases, it just is the way it is. Either he’s into you or he’s not, there usually isn’t an in-between. So, let go of the guys that just can’t get it together to like you for you because chances are they aren’t the ones for you anyway. Don’t waste your time because it’s better spent on someone that will show you their interest off the bat and treat you the way you deserve to be treated.