We’re always wondering what’s going on inside our guy’s head, but thanks to Shape Magazine, we may finally know the answer.

Interviewing over a dozen guys between the ages of 19 and 56, Shape got the scoop from men across the dating spectrum. Married, single and divorced, doctors, NFL players and music industry professionals—you name it, they asked him.

Bet you’re curious about what these men had to say! Well..

#1- When it comes to gift giving, as much as we would love to be surprised by our favorite Gucci handbag under the tree this Christmas, it’s just not going to happen.

Unless, of course, you help your man out! 32-year-old Richie Frieman says, “[If you don’t] give us a hint or just flat out tell us what you’d like, you are most likely going to end up with something unwanted.” His wife can certainly attest. Richie gave her tickets to a wrestling match for their anniversary because “she said she liked sports.” Oops!

#2-They get jealous too!

Not many men will admit this right off the bat, but according to NFL Linebacker Thomas Howard, “We don’t like when you’re laughing too hard at another man’s jokes.”

Haven’t we heard that one before? That’s because its true! Men and women can agree that physical attraction is only part of—a very small part of—what makes a relationship successful.

“If I want to be in a relationship with somebody, I need to have a deeper connection with them than just the physical. The best thing that a woman could do to attract me is to be herself.”—This is coming from pretty boy Aaron Carter, child superstar.

While your man may whine about going to Pottery Barn, most of the time he really doesn’t mind a trip to the mall or running a few errands. In fact, Celebrity Trainer Lalo Fuentes says, “We actually like going shopping with you…as long as you let us pick out your outfit.” Bribery goes a long way, ladies!

We may get made fun of for spending so much time worrying about how we look, but as it turns out, men are just as self-conscious as women…especially at the gym. 34 year-old Chuck Hughes confesses, “At the gym, men…check themselves out in the mirror just as much as women do.” So the truth comes out! 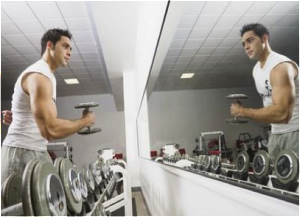 To find out even more of these honest hotties had to say, visit http://www.shape.com/lifestyle/sex-and-love/14-things-men-wish-women-knew?page=1.