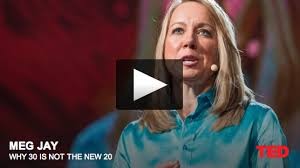 There is a recent a buzz about how 30 is the new 20, but top psychologists say this is far from the truth. Twenty-somethings are putting off career and relationship decisions based on the belief that they have “downtime” before “real life” begins.

If you’re in your twenties and think that you have all the time in the world to start investing in your future, you’re wrong. Meg Jay, a clinical psychologist gave a TED talk about the false notion that twenty-somethings think they have all the time in the world to figure out their careers and their love lives. “Claiming your twenties is one of the simplest yet most transformative things you can do for work, for love, for your happiness, maybe even for the world,” says Jay.

In her talk, she calls the decade of your twenties “The Developmental Sweet-spot.” People in their twenties are often poorly influenced to believe that this period of life is an extended adolescence meant for living their life to the fullest by doing what they want while they still can. However, Meg Jay accurately points out how living your life to the fullest should include investing in your future NOW rather than later.

In her TED Talk, she says that the brain’s second and final growth spurt occurs in a person’s twenties, so if there is something you want to change about yourself, now is the time to do it. One of Jay’s 20-something patients share that she was dating a guy that she knew was a bad match for her. Jay questions the patient on why she would date a guy she doesn’t see a future with. Sadly, most twenty-somethings waste their time on relationships that have no future because they are waiting until their thirties to settle down with “The One.” Meg Jay says that this is a serious problem because when people do this, they often end up settling for someone out of convenience when they hit that 30 mark because it’s “time” to get married. “The best time to start working on your marriage is before you have one,” says Jay. “And that means being as intentional with love as you are with work.”

The bottom line is do not wait to start thinking about your future and building towards the life you ultimately want to achieve. Second best shouldn’t be your final destination in your career or your love life. Take charge and take initiative, go get the life you want NOW because time is working against you and it’s time for you to start pushing back.

here’s the link to the TED Talk: